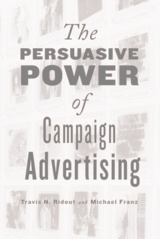 The Persuasive Power of Campaign Advertising offers a comprehensive overview of political advertisements and their changing role in the Internet age. Travis Ridout and Michael Franz examine how these ads function in various kinds of campaigns and how voters are influenced by them.

The authors particularly study where ads are placed, asserting that television advertising will still be relevant despite the growth of advertising on the Internet. The authors also explore the recent phenomenon of outrageous ads that "go viral" on the web-which often leads to their replaying as television news stories, generating additional attention.

Michael M. Franz is Associate Professor of Government and Legal Studies at Bowdoin College and a coauthor (with Paul B. Freedman, Kenneth M. Goldstein, and Travis N. Ridout) of Campaign Advertising and American Democracy (Temple).

The Persuasive Potential of Campaign Advertising
Table of Contents
1. The Role of Campaign Advertising
2. The Problem of Persuasion
3. A Brief Primer on Data and Research Design
4. How Race Context Matters
5. How Ad Negativity and Emotional Appeals Matter
6. How Receiver Characteristics Matter
7 – How Ad Coverage in News Matters
8. The Future Study of Ad Effects
Appendix A -- Variable Coding
Appendix B -- Full Model Results from 4
Appendix C -- Additional Model Results from 5
References