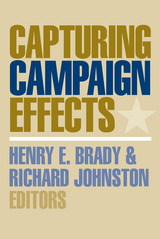 Capturing Campaign Effects is the definitive study to date of the influence of campaigns on political culture. Comprising a broad exploration of campaign factors (debates, news coverage, advertising, and polls) and their effects (priming, learning, and persuasion), as well as an impressive survey of techniques for the collection and analysis of campaign data, Capturing Campaign Effects examines different kinds of campaigns in the U.S. and abroad and presents strong evidence for significant campaign effects.

"Capturing Campaign Effects is an accessible and penetrating account of modern scholarship on electoral politics. It draws critical insights from a range of innovative analyses."
--Arthur Lupia, University of Michigan

"What a wonderful way to usher in the new era of election studies! This book spotlights fascinating paradoxes in the literature of voting behavior, highlights many promising approaches to resolving those paradoxes, and shows how these strategies can yield important findings with terrific payoffs for our understanding of contemporary democracy. Fasten your seatbelts, folks: scholarship on elections is about to speed up thanks to this collection of great essays."
--Jon Krosnick, Stanford University

"The past decade has seen a renewed interest in understanding campaign effects. How and when do voters learn? Does the election campaign even matter at all? Capturing Campaign Effects draws on leading political scientists to address these matters. The result is a collection that will become the major reference for the study of campaigns. The lesson that emerges is that campaigns do affect voter decision making, usually for the better."
--Robert S. Erikson, Columbia University

Henry E. Brady is Class of 1941 Monroe Deutsch Professor of Political Science and Public Policy, and Director of the Survey Research Center at the University of California, Berkeley.

Richard Johnston is Professor and Head of Political Science and Distinguished University Scholar at the University of British Columbia.
TABLE OF CONTENTS