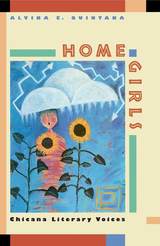 "Home Girls makes an original, bold, and significant contribution to feminist studies, Chicana/o studies, and literature. Quintana accomplishes what few critics in Chicana/o studies have done: she applies different interpretive paradigms to her reading of Chicana texts, blending ethnography with literary criticism, ideological analysis with semiotics. Her reading of literary texts is rich in texture and detail."

Chicana writers in the United States write to inspire social change, to challenge a patriarchal and homophobic culture, to redefine traditional gender roles, to influence the future. Alvina E. Quintana examines how Chicana writers engage literary convention through fiction, poetry, drama, and autobiography as a means of addressing these motives.

Her analysis of the writings of Gloria Anzaldua, Ana Castillo, Denise Chavez, Sandra Cisneros, and Cherrie Moraga addresses a multitude of issues: the social and political forces that influenced the Chicana aesthetic; Chicana efforts to open a dialogue about the limitation of both Anglo-American feminism and Chicano nationalism; experimentations with content and form; the relationship between imaginative writing and self-reflexive ethnography; and performance, domesticity, and sexuality.