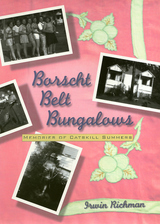 Every year between 1920 and 1970, almost one million of New York City's Jewish population summered in the Catskills. Hundreds of thousands still do. While much has been written about grand hotels like Grossinger's and the Concord, little has appeared about the more modest bungalow colonies and kuchaleins ("cook for yourself" places) where more than 80 percent of Catskill visitors stayed.These were not glamorous places, and middle-class Jews today remember the colonies with either aversion or fondness. Irwin Richman's narrative, anecdotes, and photos recapture everything from the traffic jams leaving the city to the strategies for sneaking into the casinos of the big hotels. He brings to life the attitudes of the renters and the owners, the differences between the social activities and swimming pools advertised and what people actually received. He reminisces about the changing fashion of the guests and owners—everything that made summers memorable.The author remembers his boyhood: what it was like to spend summers outside the city, swimming in the Neversink, "noodling around," and helping with the bungalow operation, while Grandpa charged the tenants and acted as president of Congregation B'nai.
AUTHOR BIOGRAPHY
Irwin Richman, Professor of American Studies and History at Pennsylvania State University at Harrisburg and author of Catskills, NY, has spent at least part of every summer of his life in the Catskills. Richman grew up in the bungalow colony business. His parents Alexander and Bertha owned a small colony, and his grandfather Abraham was in the mortgage business. From an early age Irwin went along on the detailed site visits to other colonies that were made prior to granting loans. He also worked as a counselor and as a camp director at their large colonies.
TABLE OF CONTENTS


Acknowledgments1. Introduction2. A. Richman, Woodbourne, New York3. Farmer's Life4. Unzereh Menschen (Our People)5. The River and the Woods6. Noodling Around: Kids at Large7. To Town: The Escape8. Daily Life: Mostly Adults9. The Quest for Entertainment10. Religion11. Summer Emergencies and Other Unforgetable Events12. The Day Camp13. Crime and Punishment14. An Age of Change15. Ghosts Along the RoadNotesBibliographyIndexPhotographs