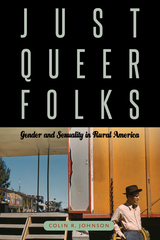 Most studies of lesbian and gay history focus on urban environments. Yet gender and sexual diversity were anything but rare in nonmetropolitan areas in the first half of the twentieth century. Just Queer Folks explores the seldom-discussed history of same-sex intimacy and gender nonconformity in rural and small-town America during a period when the now familiar concepts of heterosexuality and homosexuality were just beginning to take shape.

Eschewing the notion that identity is always the best measure of what can be known about gender and sexuality, Colin R. Johnson argues instead for a queer historicist approach. In so doing, he uncovers a startlingly unruly rural past in which small-town eccentrics, "mannish" farm women, and cross-dressing Civilian Conservation Corps enrollees were often just queer folks so far as their neighbors were concerned. Written with wit and verve, Just Queer Folks upsets a whole host of contemporary commonplaces, including the notion that queer history is always urban history.