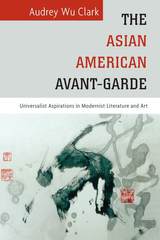 The Asian American Avant-Garde is the first book-length study that conceptualizes a long-neglected canon of early Asian American literature and art. Audrey Wu Clark traces a genealogy of counter-universalism in short fiction, poetry, novels, and art produced by writers and artists of Asian descent who were responding to their contemporary period of Asian exclusion in the United States, between the years 1882 and 1945.

Believing in the promise of an inclusive America, these avant-gardists critiqued racism as well as institutionalized art. Clark examines racial outsiders including Isamu Noguchi, Dong Kingman and Yun Gee to show how they engaged with modernist ideas, particularly cubism. She draws comparisons between writers such as Sui Sin Far and Carlos Bulosan with modernist luminaries like Stein, Eliot, Pound, and Proust.

Acknowledging the anachronism of the term “Asian American” with respect to these avant-gardists, Clark attempts to reconstruct it. The Asian American Avant-Garde explores the ways in which these artists and writers responded to their racialization and the Orientalism that took place in modernist writing.

Audrey Wu Clark is an Assistant Professor of English at the United States Naval Academy.

Toward an Asian American Modernism

The Modernist Haiku during Japanese Exclusion

in Carlos Bulosan’s America Is in the Heart

Asian American Universalism and the Radicalism

of Performing “Assimilation” during Asian Exclusion