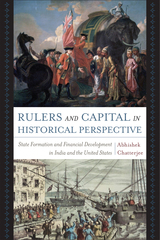 Rulers and Capital in Historical Perspective explains why modern banking and credit systems emerged in the nineteenth century only in certain countries that then subsequently industrialized and became developed.

Tracing the contemporaneous cases of India and the United States over time, Abhishek Chatterjee identifies the factors that were crucial to the development and regulation of a modern banking and credit system in the United States during the first third of the nineteenth century. He contrasts this situation with India’s, where the state never formally incorporated a sophisticated private credit system, and thus relegated it to the sphere of the informal economy.

Chatterjee identifies certain features in both societies, often—though not always—associated with colonialism, that tended to restrict the formation of modern institutionalized money and credit markets. Rulers and Capital in Historical Perspective demonstrates thatnotwithstanding the many other differences between the North American colonies (prior to independence), and India, the same facets of their relationships with Great Britain prevented the emergence of a modern banking system in the two respective societies.

Abhishek Chatterjee is an Assistant Professor of Political Science at the University of Montana, in Missoula.

TABLE OF CONTENTS
Contents
Acknowledgments
1. Introduction: The Question and the Argument in Brief
2. The Argument and the Literature(s)
3. Public Credit and the Emergence of a Money and Credit System in the United States
4. Merchants, Bankers, and Rulers: States, Money, and Credit in India
5. Banks and the State: The United States, 1790–1836
6. Conclusion and Further Implications
Notes
References
Index
REQUEST ACCESSIBLE FILE