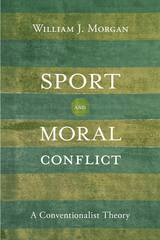 What is the purpose of sport, and how are ethical conceptions of sport shaped by the answers to this question? In Sport and Moral Conflict, William Morgan investigates, examining sport as a moral crucible that puts athletes in competitive, emotionally charged situations where fairness and equality are contested alongside accomplishment.

Morgan looks at the modern Olympics—from 1906 Athens to 1924 Paris, when the Games reached international prestige — in order to highlight the debate about athletic excellence and the amateur-professional divide. Whereas the Americans emphasized winning, the Europeans valued a love of the game. Morgan argues that the existing moral theories of sport—formalism and broad internalism (aka interpretivism), which rely on rules and general principles—fall short when confronted with such a dispute as the transition from amateur to professional sport. As such, he develops a theory of conventionalism, in which the norms at work in athletic communities determine how players should ethically acquit themselves. Presenting his case for an ethical theory of sport, Morgan provides insights regarding the moral controversies and crises that persist today.

AUTHOR BIOGRAPHY
William J. Morgan is Professor Emeritus, Division of Occupational Science and the Annenberg School for Communication and Journalism, University of Southern California. He is author of multiple books, most recently of Why Sports Morally Matter, co-editor of the Routledge Handbook of the Philosophy of Sport and editor of Ethics in Sport, third edition.