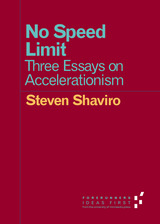 Accelerationism is the bastard offspring of a furtive liaison between Marxism and science fiction. Its basic premise is that the only way out is the way through: to get beyond capitalism, we need to push its technologies to the point where they explode. This may be dubious as a political strategy, but it works as a powerful artistic program.

Other authors have debated the pros and cons of accelerationist politics; No Speed Limit makes the case for an accelerationist aesthetics. Our present moment is illuminated, both for good and for ill, in the cracked mirror of science-fictional futurity.

Steven Shaviro is DeRoy Professor of English at Wayne State University and author of The Universe of Things: On Speculative Realism (Minnesota, 2014), Without Criteria: Kant, Whitehead, Deleuze, and Aesthetics (MIT, 2009), Connected, or What it Means to Live in the Network Society (Minnesota, 2003) and The Cinematic Body (Minnesota, 1993).