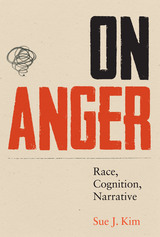 Anger is an emotion that affects everyone regardless of culture, class, race, or gender—but at the same time, being angry always results from the circumstances in which people find themselves. In On Anger, Sue J. Kim opens a stimulating dialogue between cognitive studies and cultural studies to argue that anger is always socially and historically constructed and complexly ideological, and that the predominant individualistic conceptions of anger are insufficient to explain its collective, structural, and historical nature.

On Anger examines the dynamics of racial anger in global late capitalism, bringing into conversation work on political anger in ethnic, postcolonial, and cultural studies with recent studies on emotion in cognitive studies. Kim uses a variety of literary and media texts to show how narratives serve as a means of reflecting on experiences of anger and also how we think about anger—its triggers, its deeper causes, its wrongness or rightness. The narratives she studies include the film Crash, Maxine Hong Kingston’s The Woman Warrior, Tsitsi Dangarembga’s Nervous Conditions and The Book of Not, Ngugi wa Thiong’o’s Devil on the Cross and Wizard of the Crow, and the HBO series The Wire. Kim concludes by distinguishing frustration and outrage from anger through a consideration of Stéphane Hessel’s call to arms, Indignez-vous! One of the few works that focuses on both anger and race, On Anger demonstrates that race—including whiteness—is central to our conceptions and experiences of anger.

Sue J. Kim is Associate Professor of English at the University of Massachusetts, Lowell. She is the author of Critiquing Postmodernism in Contemporary Discourses of Race and has published essays on race and narrative in Modern Fiction Studies, Journal of Asian American Studies, College Literature, and Narrative.

REVIEWS
[Kim’s] very timely book gives us a much needed window through which the collective anger of people in Ferguson and too many other American cities becomes comprehensible.
— Melus