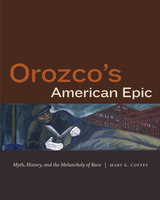 Between 1932 and 1934, José Clemente Orozco painted the twenty-four-panel mural cycle entitled The Epic of American Civilization in Dartmouth College's Baker-Berry Library. An artifact of Orozco's migration from Mexico to the United States, the Epic represents a turning point in his career, standing as the only fresco in which he explores both US-American and Mexican narratives of national history, progress, and identity. While his title invokes the heroic epic form, the mural indicts history as complicit in colonial violence. It questions the claims of Manifest Destiny in the United States and the Mexican desire to mend the wounds of conquest in pursuit of a postcolonial national project. In Orozco's American Epic Mary K. Coffey places Orozco in the context of his contemporaries, such as Diego Rivera and David Alfaro Siqueiros, and demonstrates the Epic's power as a melancholic critique of official indigenism, industrial progress, and Marxist messianism. In the process, Coffey finds within Orozco's work a call for justice that resonates with contemporary debates about race, immigration, borders, and nationality.
AUTHOR BIOGRAPHY
Mary K. Coffey is Associate Professor of Art History at Dartmouth College. She is the author of How a Revolutionary Art Became Official Culture: Murals, Museums, and the Mexican State, also published by Duke University Press, and coeditor of Modern Art in Africa, Asia, and Latin America: An Introduction to Global Modernisms.
REVIEWS
-- Claire F. Fox, author of Making Art Panamerican: Cultural Policy and the Cold War