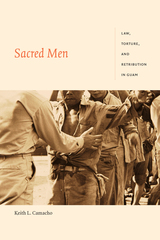 Between 1944 and 1949 the United States Navy held a war crimes tribunal that tried Japanese nationals and members of Guam's indigenous Chamorro population who had worked for Japan's military government. In Sacred Men Keith L. Camacho traces the tribunal's legacy and its role in shaping contemporary domestic and international laws regarding combatants, jurisdiction, and property. Drawing on Giorgio Agamben's notions of bare life and Chamorro concepts of retribution, Camacho demonstrates how the U.S. tribunal used and justified the imprisonment, torture, murder, and exiling of accused Japanese and Chamorro war criminals in order to institute a new American political order. This U.S. disciplinary logic in Guam, Camacho argues, continues to directly inform the ideology used to justify the Guantánamo Bay detention center, the torture and enhanced interrogation of enemy combatants, and the American carceral state.
AUTHOR BIOGRAPHY
Keith L. Camacho is Associate Professor of Asian American Studies at the University of California, Los Angeles, author of Cultures of Commemoration: The Politics of War, Memory, and History in the Mariana Islands, and coeditor of Militarized Currents: Toward a Decolonized Future in Asia and the Pacific.
REVIEWS
-- Lisa Yoneyama, author of Cold War Ruins: Transpacific Critique of American Justice and Japanese War Crimes