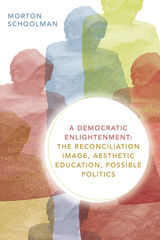 In A Democratic Enlightenment Morton Schoolman proposes aesthetic education through film as a way to redress the political violence inflicted on difference that society constructs as its racialized, gendered, Semitic, and sexualized other. Drawing on Voltaire, Diderot, and Schiller, Schoolman reconstructs the genealogical history of what he calls the reconciliation image—a visual model of a democratic ideal of reconciliation he then theorizes through Whitman's prose and poetry and Adorno's aesthetic theory. Analyzing The Help (2011) and Gentleman's Agreement (1947), Schoolman shows how film produces a more advanced image of reconciliation than those originally created by modernist artworks. Each film depicts violence toward racial and ethnic difference while also displaying a reconciliation image that aesthetically educates the public about how the violence of constructing difference as otherness can be overcome. Mounting a democratic enlightenment, the reconciliation image in film illuminates a possible politics for challenging the rise of nationalism's violence toward differences in all their diversity.
AUTHOR BIOGRAPHY
Morton Schoolman is Professor of Political Science at the State University of New York at Albany and author of Reason and Horror: Critical Theory, Democracy, and Aesthetic Individuality and The Imaginary Witness: The Critical Theory of Herbert Marcuse.
REVIEWS
-- Jane Bennett, author of Influx and Efflux: Writing Up with Walt Whitman


-- Lori Jo Marso, author of Politics with Beauvoir: Freedom in the Encounter