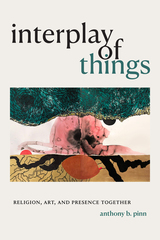 In Interplay of Things Anthony B. Pinn theorizes religion as a technology for interrogating human experiences and the boundaries between people and other things. Rather than considering religion in terms of institutions, doctrines, and creeds, Pinn shows how religion exposes the openness and porousness of all things and how they are always involved in processes of exchange and interplay. Pinn examines work by Nella Larsen and Richard Wright that illustrates an openness between things, and he traces how pop art and readymades point to the multidirectional nature of influence. He also shows how Ron Athey's and Clifford Owens's performance art draws out inherent interconnectedness to various cultural codes in ways that reveal the symbiotic relationship between art and religion as a technology. Theorizing that antiblack racism and gender- and class-based hostility constitute efforts to close off the porous nature of certain bodies, Pinn shows how many artists have rebelled against these attempts to counter openness. His analyses offer a means by which to understand the porous, unbounded, and open nature of humans and things.
AUTHOR BIOGRAPHY
Anthony B. Pinn is Agnes Cullen Arnold Professor of Humanities and Professor of Religion at Rice University and the author of many books, including Humanism: Essays on Race, Religion, and Popular Culture, Introducing African American Religion, and The End of God-Talk: An African American Humanist Theology. He is coeditor of Creating Ourselves: African Americans and Hispanic Americans on Popular Culture and Religious Expression, also published by Duke University Press.
REVIEWS
“Religion isn't what people do but how they interpret, Anthony B. Pinn argues in this provocative work. Building on years of scholarly insight, Pinn asks readers to see how in their human relationships and their exchanges with the material world they embody religion. A must-read for scholars of religion.”

“Anthony B. Pinn’s exploration into the interplay among religion, spirituality, and the performance of black creativity is a force to behold. Writing with probing insight, Pinn underscores the liminal spaces and edges where the bodily and the embodied blur the lines between the pedantic and the spectacle, imploding along the way the artifice of the sacred in exchange for the sanctity of artistic liberation.”