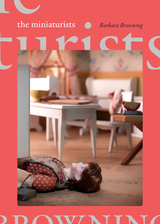 In The Miniaturists Barbara Browning explores her attraction to tininess and the stories of those who share it. Interweaving autobiography with research on unexpected topics and letting her voracious curiosity guide her, Browning offers a series of charming short essays that plumb what it means to ponder the minuscule. She is as entranced by early twentieth-century entomologist William Morton Wheeler, who imagined corresponding with termites, as she is by Frances Glessner Lee, the “mother of forensic science,” who built intricate dollhouses to solve crimes. Whether examining Honey, I Shrunk the Kids, the Schoenhut toy piano dynasty, portrait miniatures, diminutive handwriting, or Jonathan Swift’s and Lewis Carroll’s preoccupation with tiny people, Browning shows how a preoccupation with all things tiny can belie an attempt to grasp vast---even cosmic---realities.
AUTHOR BIOGRAPHY
Barbara Browning is Professor of Performance Studies at New York University. Her books include The Gift, I’m Trying to Reach You, and The Correspondence Artist.
REVIEWS
"An appealing collection of fresh, free-wheeling essays."