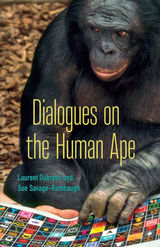 Humanness is typically defined by our capacity for language and abstract thinking. Yet decades of research led by the primatologist Sue Savage-Rumbaugh has shown that chimpanzees and bonobos can acquire human language through signing and technology.

Drawing on this research, Dialogues of the Human Ape brings Savage-Rumbaugh into conversation with the philosopher Laurent Dubreuil to explore the theoretical and practical dimensions of what being a “human animal” means. In their use of dialogue as the primary mode of philosophical and scientific inquiry, the authors transcend the rigidity of scientific and humanist discourses, offering a powerful model for the dissemination of speculative hypotheses and open-ended debates grounded in scientific research.

Arguing that being human is an epigenetically driven process rather than a fixed characteristic rooted in genetics or culture, this book suggests that while humanness may not be possible in every species, it can emerge in certain supposedly nonhuman species. Moving beyond irrational critiques of ape consciousness that are motivated by arrogant, anthropocentric views, Dialogues on the Human Ape instead takes seriously the continuities between the ape mind and the human mind, addressing why language matters to consciousness, free will, and the formation of the “human animal” self.

Laurent Dubreuil is professor of comparative literature, Romance studies, and cognitive science at Cornell University. His many books include The Intellective Space (Minnesota, 2015).

Sue Savage-Rumbaugh was senior scientist at the Iowa Primate Learning Sanctuary and is co-chair president of the Bonobo Hope initiative.

Contents
Foreword
Prelude
1. On Animals and Apes
2. On Dialogue and Consciousness
3. On the Flavors of Consciousness
4. On Language and Apes
5. On Free Will
Annex: A Timeline of Ape Language Research