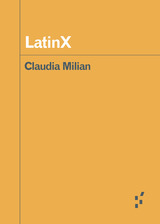 LatinX has neither country nor fixed geography. LatinX, according to Claudia Milian, is the most powerful conceptual tool of the Latino/a present, an itinerary whose analytic routes incorporate the Global South and ecological devastation. Milian’s trailblazing study deploys the indeterminate but thunderous “X” as intellectual armor, a speculative springboard, and a question for our times that never stops being asked. LatinX sorts out and addresses issues about the unknowability of social realities that exceed our present knowledge.

Claudia Milian is associate professor and director of the Program in Latino/a Studies in the Global South at Duke University. She is author of Latining America.