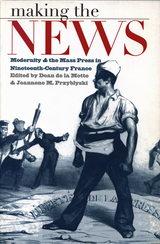 Making the News: Modernity and the Mass Press in Nineteenth-Century France
edited by Dean de la Motte, Jeannene M. Przyblyski and Jeannene M. Przyblyski
University of Massachusetts Press, 1999
Paper: 978-1-55849-177-9
Much recent writing on print culture has focused on the social and political implications of the transition from "elite" to "mass" culture in the 1800s. The essays in this volume add significantly to our understanding of the role of the nineteenth-century French press in producing the commodities, consumers, and ideological frameworks that are the hallmarks of this shift. The book also offers an opportunity for useful comparisons with recent scholarship on the rise on the popular press in the United States, Great Britain, and Germany.

The essays address a wide range of topics, from the emergence of commercial daily newspapers during the July Monarchy to the photographic representation of women in the Paris Commune. Together they demonstrate that the French mass press was far more heterogeneous than previously supposed, tapping into an expanding readership composed of a variety of publics—from affluent bourgeois to disaffected workers to disenfranchised women. It was also relentlessly innovative, using caricature, argot, advertisements, and other attention-grabbing techniques that blurred the lines separating art, politics, and the news.
AUTHOR BIOGRAPHY
Dean de la Motte is assistant professor of French at Guilford College. Jeannene M. Przyblyski is an independent scholar who lives in San Francisco.