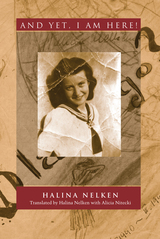 BUY
And Yet, I Am Here!
by Halina Nelken
introduction by Gideon Hausner
University of Massachusetts Press, 2001
Paper: 978-1-55849-292-9
When Germany invaded Poland in 1939, Halina Nelken was a precocious fifteen-year-old, living a middle-class life in Krakow. Like other girls her age, she recorded her personal observations and feelings in a diary. As conditions in Krakow deteriorated and her family was forced into the Jewish ghetto, she continued to write, eventually smuggling her diary out with a Catholic friend. This remarkable book tells the story of Nelken's experiences in the ghetto and later in eight Nazi concentration camps, including Plaszow, Auschwitz, and RavensbrÃ¶ck. Her diary entries, written between 1938 and 1943, form the core of the volume and are supplemented by recollections written shortly after the war, and by later commentaries and explanatory notes which she added in the mid-1980s. Although there exist numerous published and unpublished memoirs by Holocaust survivors, Nelken's book presents one of the few extant diaries written at the time. Already released in Polish and German editions, it has been hailed as one of the finest works of its kind. Now it is available in English for the first time.
AUTHOR BIOGRAPHY
After World War II, Halina Nelken pursued a career as an art historian, moving to the United States in 1959. She now lives in Cambridge, Massachusetts.