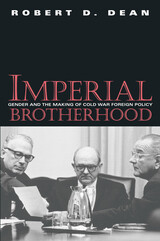 Imperial Brotherhood: Gender and the Making of Cold War Foreign Policy
by Robert D. Dean and Robert D. Dean
University of Massachusetts Press, 2003
eISBN: 978-1-61376-080-2
Paper: 978-1-55849-414-5
This provocative book begins with a question about the Vietnam War. How is it, asks Robert D. Dean, that American policymakers—men who prided themselves on "hardheaded pragmatism" and shunned "fuzzy idealism"—could have committed the nation to such a ruinous, costly, and protracted war? The answer, he argues, lies not simply in the imperatives of anticommunist ideology or in any reasonable calculation of national interest. At least as decisive in determining the form and content of American Cold War foreign policy were the common background and shared values of its makers, especially their deeply ingrained sense of upper-class masculinity.

Dean begins by examining the institutions that shaped the members of the U.S. foreign policy establishment—all-male prep schools, Ivy League universities, collegiate secret societies, and exclusive men's clubs—that instilled stoic ideals of competition, duty, and loyalty. Service in elite military units during World War II further reinforced this pattern of socialization, eventually creating an "imperial brotherhood" imbued with a common global vision. More than that, according to Dean, the commitment to tough-minded masculinity shared by these men encouraged the pursuit of policies that were aggressively interventionist abroad and intolerant of dissent at home.

Applying his gendered analysis to the McCarthy era, Dean reveals how the purge of suspected homosexuals in the State Department not only paralleled the repression of the political left, but also reflected a bitter contest for power between the foreign policy elite and provincial Congressional conservatives. He then shows how issues of manliness similarly influenced the politics and policies of the Kennedy and Johnson administrations. Just as programs like the Peace Corps were grounded in ideals of masculine heroism, decisions about intervention in Vietnam were inextricably bound up with ideas about male strength and power. In the end, Dean makes a persuasive case that these elite constructions of male identity fundamentally shaped the course of American foreign policy during the early decades of the Cold War.
AUTHOR BIOGRAPHY
Robert D. Dean is assistant professor of history at Eastern Washington University.