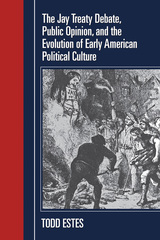 BUY
The Jay Treaty Debate, Public Opinion, and the Evolution of Early American Political Culture
by Todd Estes
University of Massachusetts Press
eISBN: 978-1-61376-087-1
Paper: 978-1-55849-669-9
During the mid-1790s, citizens of the newly formed United States became embroiled in a divisive debate over a proposed commercial treaty with Great Britain. Long regarded as a pivotal event in the history of the early republic, the controversy pitted pro-treaty Federalists against anti-treaty Jeffersonian Republicans. Yet as Todd Estes argues in this perceptive study, the year-long debate over the ratification of the Jay Treaty represented more than a clash over foreign policy between two nascent political parties. It also marked a significant milestone in the role played by public opinion in the young nation’s political culture. Drawing evidence from a broad range of sources—petitions and newspaper polemics, crowd gatherings, as well as rhetorical exchanges on the floor of Congress—Estes shows how both sides in the Jay Treaty debate mounted extensive and unprecedented campaigns to marshal popular support for their positions. Although many Americans initially opposed the treaty, the Federalists proved particularly skillful at courting the public and eventually prevailed over their opponents, just as they had won earlier battles over neutrality, democratic societies, and the Whiskey Rebellion. But the Republicans, Estes points out, learned from the experience, and in the long run they would become even more adept than the Federalists at shaping public opinion. Even at the time, amid the fierce political rhetoric and colorful street demonstrations that characterized the Jay Treaty debate, participants recognized that important changes were taking place. Not only did the dispute solidify party allegiances, it also legitimized and advanced popular involvement in the political process. While some welcomed the emergence of this new, more democratic political culture, Estes concludes, others were much more ambivalent.
AUTHOR BIOGRAPHY
Todd Estes is associate professor of history at Oakland University.