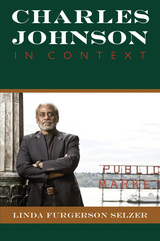 Author of the National Book Award–winning novel Middle Passage, Charles Johnson belongs to a generation of writers who collectively raised African American literature to a new position of prominence during the late twentieth century. In this book, Linda Furgerson Selzer takes an interdisciplinary approach to Johnson’s major fiction, providing fresh insight into his work by placing it within a broad historical context. In addition to Middle Passage (1990), Selzer focuses on three other novels: Faith and the Good Thing (1974), Oxherding Tale (1982), and Dreamer (1998). She shows how these works reflect Johnson’s participation in the larger cultural projects of several significant but often overlooked groups—young black philosophers who challenged the dominant Anglo-American empiricist tradition during the 1960s and 1970s; black Buddhists of the post–civil rights era who sought to translate an ancient religious practice into an African American idiom; and black public intellectuals who attempted to revive a cosmopolitan social ethic during the 1990s. The cultural histories of each of these groups, Selzer argues, provide important contexts for understanding Johnson’s evolution as a novelist. In the academic experience of black students who entered philosophy programs during the turbulent 1960s, the spiritual concerns of black Buddhists who have only recently begun to speak more publicly about their faith, and the cultural issues surrounding the emergence of a new cohort of African American public intellectuals, we see the roots of the social, moral, and aesthetic vision that informs what some have described as Johnson’s “philosophical fiction.” Selzer’s probing analysis of the influence of each of these contexts not only enriches our understanding of Charles Johnson’s fiction, it also makes a broader contribution to the cultural history of African America during the past half century.
AUTHOR BIOGRAPHY
Linda Furgerson Selzer is assistant professor of English at Pennsylvania State University.