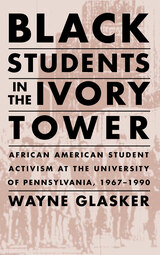 Black Students in the Ivory Tower: African American Student Activism at the University of Pennsylvania, 1967-1990
by Wayne C. Glasker and Wayne C. Glasker
University of Massachusetts Press, 2002
Paper: 978-1-55849-756-6
In the late 1960s and early 1970s, the number of African American undergraduates at the University of Pennsylvania grew dramatically. This book describes the circumstances surrounding the university's decision to increase its black enrollment and the consequences that followed. Focusing on the role of black student activism, Wayne C. Glasker traces the trajectory of controversy and debate over such issues as assimilation, integration, black nationalism, and cultural pluralism on a single university campus.

Glasker begins his study in the late 1960s, when the university's expansion into a predominantly black Philadelphia neighborhood precipitated a massive sit-in and protest. In response, Penn accelerated the process of admitting more black students, doubling the number of black matriculants by September 1969. Many came from inner city public high schools with backgrounds, ideas, and interests far different from those of the affluent middle- and upper-class white students who constituted the majority of the undergraduate population. As a result, the next decade was marked by recurrent tension and conflict, as black students at Penn rejected assimilation and agitated successfully for the creation of a variety of institutions that recognized their needs. These included an Afro-American studies program, a residence for students interested in black culture, and a Black Student League. Following a 1978 sit-in, they won a demand for an Inter-cultural Center and formed the United Minorities Council, and in 1986 they joined with white activists to press the university to divest its holdings from companies doing business in South Africa.

Throughout the book Glasker interweaves two parallel stories: that of an Ivy League university wrestling with questions of diversity, compensatory education, and the meaning of merit and qualification; and that of black students grappling with issues of assimilation, separatism, and cultural pluralism. In the end, he argues, the students sought to preserve their own distinctive ethnic culture, identity, and heritage while pursuing economic upward mobility. Rather than separatism, they aspired to a form of biculturalism that involved economic empowerment without cultural assimilation.
AUTHOR BIOGRAPHY
Wayne C. Glasker is associate professor of history and director of the African American Studies Program at Rutgers University, Camden.