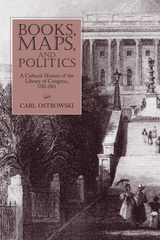 Delving into the origins and development of the Library of Congress, this volume ranges from the first attempt to establish a national legislative library in 1783 to the advent of the Civil War. Carl Ostrowski shows how the growing and changing Library was influenced by—and in turn affected—major intellectual, social, historical, and political trends that occupied the sphere of public discourse in late eighteenth- and early nineteenth-century America.

The author explores the relationship between the Library and the period's expanding print culture. He identifies the books that legislators required to be placed in the Library and establishes how these volumes were used. His analysis of the earliest printed catalogs of the Library reveals that law, politics, economics, geography, and history were the subjects most assiduously collected. These books provided government officials with practical guidance in domestic legislation and foreign affairs, including disputes with European powers over territorial boundaries.

Ostrowski also discusses a number of secondary functions of the Library, one of which was to provide reading material for the entertainment and instruction of government officials and their families. As a result, the richness of America's burgeoning literary culture from the 1830s to the 1860s was amply represented on the Library's shelves. For those with access to its Capitol rooms, the Library served an important social function, providing a space for interaction and the display and appreciation of American works of art.

Ostrowski skillfully demonstrates that the history of the Library of Congress offers a lens through which we can view changing American attitudes toward books, literature, and the relationship between the federal government and the world of arts and letters.
AUTHOR BIOGRAPHY
Carl Ostrowski is associate professor of English at Middle Tennessee State University. He received the American Library Association's Donald G. Davis Award for an article he wrote based on part of Books, Maps, and Politics.