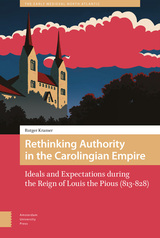 By the early ninth century, the responsibility for a series of social, religious and political transformations had become an integral part of running the Carolingian empire. This became especially clear when, in 813/4, Louis the Pious and his court seized the momentum generated by their predecessors and broadened the scope of these reforms ever further. These reformers knew they represented a movement greater than the sum of its parts; the interdependence between those wielding imperial authority and those bearing responsibility for ecclesiastical reforms was driven by comprehensive, yet still surprisingly diverse expectations.Taking this diversity as a starting point, this book takes a fresh look at the optimistic first decades of the ninth century. Extrapolating from a series of detailed case studies rather than presenting a new grand narrative, it offers new interpretations of contemporary theories of personal improvement and institutional correctio, and shows the self-awareness of its main instigators as they pondered what it meant to be a good Christian in a good Christian empire.
AUTHOR BIOGRAPHY
Rutger Kramer is currently a post-doctoral researcher within the project Visions of Community (FWF Austrian Science Fund F42) at the Institute for Medieval Research in Vienna.
TABLE OF CONTENTS


TABLE OF CONTENTSPrologueGreat Expectations Chapter 1Framing the Carolingian Reforms — The Early Years of Louis the Pious Building an Empire Communities and Discourse Communities Between Cloister and Court Chapter 2A Model for Empire — The Councils of 813 and the Institutio Canonicorum The Road to 813 Teaching the Empire 'An Effort, not an Honour': Bishops and their Responsibilities Church Fathers in Aachen Correcting Communities Communicating Correctio Channelling Authority Chapter 3Monks on the Via Regia: The World of Smaragdus of Saint-Mihiel A Life in Context Directions for a King: The Via Regia Explaining A Way: The Expositio in Regulam Sancti Benedicti A Crowning Achievement: The Diadema Monachorum The Lives of Smaragdus of Saint-Mihiel Chapter 4Caesar et abba simul: Monastic Reforms between Aachen and Aniane The Emperor and the Monks On the Outside Looking In 'Armed with the Javelins of Debate': Benedict of Aniane goes to Court The Death of an Abbot EpilogueImperial Responsibilities and the Discourse of Reforms