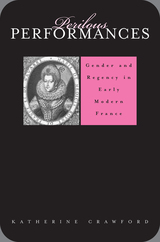 In a book addressing those interested in the transformation of monarchy into the modern state and in intersections of gender and political power, Katherine Crawford examines the roles of female regents in early modern France.

The reigns of child kings loosened the normative structure in which adult males headed the body politic, setting the stage for innovative claims to authority made on gendered terms. When assuming the regency, Catherine de Médicis presented herself as dutiful mother, devoted widow, and benign peacemaker, masking her political power. In subsequent regencies, Marie de Médicis and Anne of Austria developed strategies that naturalized a regendering of political structures. They succeeded so thoroughly that Philippe d’Orleans found that this rhetoric at first supported but ultimately undermined his authority. Regencies demonstrated that power did not necessarily work from the places, bodies, or genders in which it was presumed to reside.

While broadening the terms of monarchy, regencies involving complex negotiations among child kings, queen mothers, and royal uncles made clear that the state continued regardless of the king—a point not lost on the Revolutionaries or irrelevant to the fate of Marie-Antoinette.
TABLE OF CONTENTS