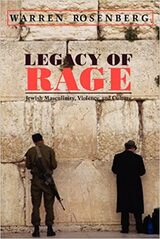 BUY
Legacy of Rage: Jewish Masculinity, Violence, and Culture
by Warren Rosenberg
University of Massachusetts Press
Paper: 978-1-55849-790-0
In books, television programs, and films, Jewish men are often depicted as erudite, comedic, malleable, and non-threatening—somewhere between Clark Kent and the early Woody Allen. Yet as Warren Rosenberg shows in this illuminating study, this widespread cultural image is not only overly simplistic, it is at odds with a legacy of Jewish male violence that goes back to the first chapters of Genesis when Cain slew Abel. From Biblical depictions of heroic warriors like King David to the medieval Jewish legend of the Golem (a fierce man of clay created by Cabalistic magic) to the fictional Alexander Portnoy, Jewish ideas of manhood reflect a simultaneous resistance and attraction to violence. According to Rosenberg, it is an ambivalence shaped by millennia of oppression as well as by the clash of Western ideas of masculinity with Eastern European rabbinical injunctions against violent action. The result has been not only gender confusion, but a suppressed rage evident in a broad range of texts created by Jewish men, from nineteenth-century Yiddish stories to contemporary Hollywood films. Isaac Babel, Henry Roth, Norman Mailer, Saul Bellow, Philip Roth, David Mamet, Barry Levinson, and Steven Spielberg are just some of the writers and filmmakers whose lives and works are marked by this legacy of rage. Yet if the need to affirm masculinity through violence remains an unacknowledged aspect of Jewish male identity, Rosenberg argues, it is not a historical inevitability. As the work of Cynthia Ozick and Tony Kushner suggests, it is possible to construct new ideas of Jewish manhood by exposing the hidden fallacies of the old.
AUTHOR BIOGRAPHY
Warren Rosenberg is professor of English at Wabash College.