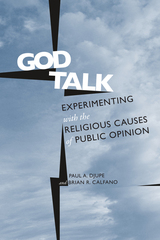 Religion’s influence on public opinion, politics, and candidates has been widely discussed in political science for a generation. God Talk isthe first volume that uses experimental methodology to establish whether and how that influence works.
Paul Djupe and Brian Calfano provide an unprecedented look at how religious cues, values, and identity-driven appeals impact candidate selection, trust, interest group support, and U.S. public opinion about tolerance, the environment, foreign policy, and related issues.
By situating their disparate, randomly assigned interventions within the broader framework of elite-based influence, the authors apply their new methodology to three questions: How do clergy affect congregation members? How are religious elites and groups and their public arguments evaluated? With what effect do political elites use religion? The results of their research provide a compelling framework for understanding the links between religion and politics.

In the series The Social Logic of Politics, edited by Scott McClurg
AUTHOR BIOGRAPHY
Paul A. Djupe is Associate Professor of Political Science at Denison University. He is the coauthor (with Christopher Gilbert) of The Political Influence of Churches and (with Laura Olson), Religious Interests in Community Conflict, and co-editor of the journal Politics & Religion.
Brian R.Calfano is Associate Professor of Political Science at Missouri State University. His research interests include religion and politics, media, and social identity. He has published articles in Political Research Quarterly, Political Behavior, Politics and Religion, Social Science Quarterly, and related outlets.
TABLE OF CONTENTS


Acknowledgments
Introduction: Obama Is a Muslim? What Religion and Politics Research Has to Say
1 Getting to the Heart of Things: The State of the Literature and the Promise of Experiments in Religion and Politics Research
PART I With What Effect Do Political Elites Use Religion?
2 God Talk: Religious Cues and Electoral Support
3 Why People Will Not Vote for Atheist Candidates, coauthored with Chelsea Back
PART II How Are Religious Elites and Groups and Their Public Arguments Evaluated?
4 Evangelizing the Environment: Decision Process Effects in Political Persuasion, coauthored with Gregory W. Gwiasda
5 Justification Not by Faith Alone: Clergy Generating Trust and Certainty by Revealing Thought
6 Between a Bloc and a Hard Place: Voters’ Perceptions of Group Threat Credibility in Elections
7 Fair and Balanced: Conditional Elite Effects on Threat Perceptions of Homosexuals among Evangelical Protestants, coauthored with Samantha Webb
PART III How Can Congregation-Based Elites Affect Members?
8 Divine Intervention? The Influence of Religious Values Communication on U.S. Foreign Intervention Policy
9 The Civil Brake: Values as Contextual Influences on Elite Framing Effects
Conclusion: An Emerging Approach to the Study of Religious Influence
Appendix
References
Index