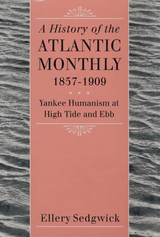 BUY
A History of the "Atlantic Monthly," 1857-1909: Yankee Humanism at High Tide and Ebb
by Ellery Sedgwick
University of Massachusetts Press, 2009
Paper: 978-1-55849-793-1
From its founding in 1857 until its sale by Houghton Mifflin in 1908, the Atlantic Monthly was the most respected literary periodical in the United States. This study focuses on the magazine's first seven editors: James Russell Lowell, James T. Fields, William Dean Howells, Thomas Bailey Aldrich, Horace Scudder, Walter Hines Page, and Bliss Perry. Ellery Sedgwick examines their personalities, editorial policies, and literary tastes, and shows how each balanced his role as advocate of "high" culture with the demands of the literary marketplace and American democracy.
Although the Atlantic was rooted in the Yankee humanism of Boston, Cambridge, and Concord, its scope was national. Sedgwick points out that while the magazine spoke for high culture, its tradition was one of intellectual tolerance and of moderate liberalism on social and political issues. It supported abolition, women's rights, and religious tolerance, and published incisive criticism of unregulated industrial capitalism. The Atlantic also played an important role in the rise of American literary realism, and published early work not only by such authors as James, Jewett, and Howells, but also by Chesnutt, Du Bois, Cahan, and Zitkala-Sa.