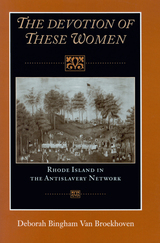 BUY
Devotion of These Women: Rhode Island in the Antislavery Network
by Deborah Van Broekhoven
University of Massachusetts Press
Paper: 978-1-55849-799-3
During the 1830s, the small state of Rhode Island flourished as a center of radical abolitionism. Inspired by William Lloyd Garrison's call for immediate emancipation, some twenty-five anti-slavery societies were formed under the leadership of the African American communities in Providence and Newport, several energetic Baptist and Congregational clergymen, and the wealthy elder statesman of the New England Friends, Moses Brown. Despite the efforts of these groups, by 1842 the antislavery movement in Rhode Island was nearly moribund, the unified hopes of earlier years having fallen victim to political wrangling. A year later the largest auxiliary in the state, the Providence Antislavery Society, turned its funds over to Amarancy Paine, who in concert with other women not only revived the abolitionist movement in the state but kept it running for another ten years. This detailed study explores how and why women like Paine emerged from the background to resuscitate and lead the antislavery cause in Rhode Island. It suggests that women more than men were accustomed to working behind the scenes, informally and without much public recognition. The crumbling of the male-centered organization revealed a previously invisible female-based structure of personal ties on which leaders were able to build the Rhode Island State Anti-Slavery Society. Because these informal ties crossed traditional racial, geographic, and gender-role boundaries, they were often tenuous and fragile. Nevertheless, by developing this network among themselves and then extending it to national leaders, a few dedicated women managed to continue a program of antislavery petitioning, meetings, and literature circulation.
AUTHOR BIOGRAPHY
Deborah Bingham Van Broekhoven taught history and American studies for twenty years, most recently at Ohio Wesleyan University. She is now executive director of the American Baptist Historical Society in Valley Forge, Pennsylvania.