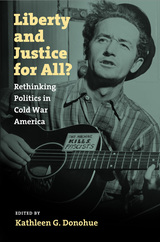 From the congressional debate over the "fall of China" to the drama of the Army–McCarthy hearings to the kitchen faceoff between Richard Nixon and Nikita Khrushchev, the political history of the early Cold War was long dominated by studies of presidential administrations, anticommunism, and foreign policy. In Liberty and Justice for All? a group of distinguished historians representing a variety of disciplinary perspectives—social history, cultural history, intellectual history, labor history, urban history, women's history, African American studies, and media studies—expand on the political history of the early Cold War by rethinking the relationship between politics and culture. How, for example, did folk music help to keep movement culture alive throughout the 1950s? How did the new medium of television change fundamental assumptions about politics and the electorate? How did American experiences with religion in the 1950s strengthen the separation of church and state? How did race, class, and gender influence the relationship between citizens and the state? These are just some of the questions addressed in this wide-ranging set of essays.