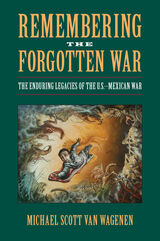 On February 2, 1848, representatives of the United States and Mexico signed the Treaty of Guadalupe Hidalgo officially ending hostilities between the two countries and ceding over one-half million square miles of land to the northern victors. In Mexico, this defeat has gradually moved from the periphery of dishonor to the forefront of national consciousness. In the United States, the war has taken an opposite trajectory, falling from its once-celebrated prominence into the shadowy margins of forgetfulness and denial.

Why is the U.S.–Mexican War so clearly etched in the minds of Mexicans and so easily overlooked by Americans? This book investigates that issue through a transnational, comparative analysis of how the tools of collective memory—books, popular culture, historic sites, heritage groups, commemorations, and museums—have shaped the war's multifaceted meaning in the 160 years since it ended. Michael Van Wagenen explores how regional, ethnic, and religious differences influence Americans and Mexicans in their choices of what to remember and what to forget. He further documents what happens when competing memories clash in a quest for dominance and control.

In the end, Remembering the Forgotten War addresses the deeper question of how remembrance of the U.S.–Mexican War has influenced the complex relationship between these former enemies now turned friends. It thus provides a new lens through which to view today's cross-border rivalries, resentments, and diplomatic pitfalls.
AUTHOR BIOGRAPHY
Michael Scott Van Wagenen is an assistant professor at Georgia Southern University, where he teaches courses in public history. He is the author of The Texas Republic and the Mormon Kingdom of God and co-editor of Between Pulpit and Pew: The Supernatural World in Mormon History and Folklore. He previously taught U.S.–Mexico borderlands history at the University of Texas at Brownsville. In addition to his scholarly research and writing, he is a national award–winning documentary filmmaker. His work has been screened at numerous film festivals and broadcast internationally on public and cable television.