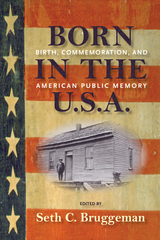 Scores of birthplace monuments and historic childhood homes dot the American landscape. These special places, many dating to the early years of the last century, have enshrined nativity alongside patriotism and valor among the key pillars of the nation's popular historical imagination. The essays in this volume suggest that the way Americans have celebrated famous births reflects evolving expectations of citizenship as well as a willingness to edit the past when those hopes go unfulfilled. The contributors also demonstrate that the reinvention of origin myths at birthplace monuments still factors in American political culture and the search for meaning in an ever-shifting global order.

Beyond asking why it is that Americans care about birthplaces and how they choose which ones to commemorate, Born in the U.S.A. offers insights from historians, curators, interpretive specialists, and others whose experience speaks directly to the challenges of managing historical sites. Each essay points to new ways of telling old stories at these mainstays of American memory. The case of the modern house museum receives special attention in a provocative concluding essay by Patricia West.