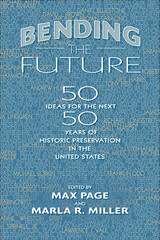 The commentators include leading preservation professionals, historians, writers, activists, journalists, architects, and urbanists. The essays offer a distinct vision for the future and address related questions, including, Who is a preservationist? What should be preserved? Why? How? What stories do we tell in preservation? How does preservation contribute to the financial, environmental, social, and cultural well-being of communities? And if the "arc of the moral universe . . . bends towards justice," how can preservation be a tool for achieving a more just society and world?
AUTHOR BIOGRAPHY
Max Page is professor of architecture and history and director of the Historic Preservation Program at the University of Massachusetts Amherst.Marla R. Miller is professor of history and director of the Public History Program at the University of Massachusetts Amherst. She is editor of the series Public History in Historical Perspective.