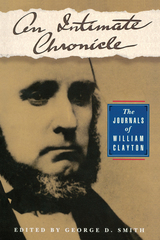 BUY FROM
An Intimate Chronicle: The Journals of William Clayton
edited by George D. Smith
Signature Books, 1995
Paper: 978-1-56085-022-9
eISBN: 978-1-56085-304-6
William Clayton is best remembered today for his hymns, especially “Come, Come Ye Saints.” But as one of the earliest Latter-day Saint scribes, he made intellectual as well as artistic contributions to his church, and his records have been silently incorporated into official Mormon scripture and history. Of equal significance are his personal impressions of day-to-day activities, which describe a social and religious world largely unfamiliar to modern readers.

In ministering to the sick, for instance, Clayton anointed with perfumed oil and rum. He performed baptisms to heal the sick. Church services, held irregularly, were referred to as “going to meeting” and seemed to be elective. He testifies of people speaking in tongues and of others “almost speaking in tongues.” When introduced to plural marriage, he was reluctant but eventually became one of its most enthusiastic proponents, marrying ten women and fathering forty-two children.

Since polygamy was initially secret, Clayton spent much of his time putting out the fires of innuendo and discontent. He caught his first plural wife rendezvousing with her former fiancé; later, when she became pregnant, her mother–his unaware mother-in-law–was so overwrought that she attempted suicide. Joseph Smith reassured him: “Just keep her at home and brook it and if they raise trouble about it and bring you before me I will give you an awful scourging and probably cut you off from the church and then I will set you ahead as good as ever.” Clayton was also the object of Emma Smith’s attentions, allegedly part of a jealous wife’s plan to make a cuckold of her errant husband.

AUTHOR BIOGRAPHY
George D. Smith is a graduate of Stanford and New York University. He is the author of Nauvoo Polygamy: “… but we called it celestial marraige”and is the editor of the landmark frontier diaries of one of the most prominent Mormon pioneers (An Intimate Chronicle: The Journals of William Clayton) and, among other books, Religion, Feminism, and Freedom of Conscience. He has published on historical and religious topics in Dialogue: A Journal of Mormon Thought, Free Inquiry, Journal of Mormon History, John Whitmer Historical Journal, Sunstone,and elsewhere. He has served on the boards of the Kenyon Review, the Leakey Foundation, and National Public Radio. He is a founder and current publisher of Signature Books.