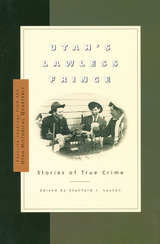 It was Sunday and worship service was in progress. One of the settlers who was not attending service eyed four known outlaws passing near town. He raced to church to spread the alarm, and parishioners leaped up, grabbed their guns, and galloped off in pursuit, joined by some neighboring cattlemen. Before it was over, one of the posse was dead.

So it went on the outskirts of Utah Territory. In this case it was the little town of Bluff where the Mormon bishop served for some ten years as de facto sheriff and his congregation as deputies. As elsewhere, law and order developed organically rather than by legislation.

In this anthology several aspects of the process are considered, including one of the worst manifestations of citizen action: vigilantism. Territorial Utah witnessed more lynchings than legal executions. Another citizen trait was an unexpected indifference to vice. In 1908 Salt Lake City had 148 registered prostitutes overseen by a madam who was recruited for the position by the mayor and city council. During Prohibition one of the largest distilleries in the West operated in a Salt Lake warehouse.

What is to be learned from this? The contributors to these fourteen articles leave moral considerations to the reader’s contemplation, while providing surprises along the way in an extremely engaging—dare we say arresting—read.