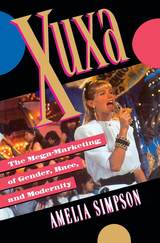 Backed by Brazil's TV Globo, the fourth-largest commercial network in the world, Xuxa has built an empire. Amelia Simoson's colorful portrayal is the first book to explore how Xuxa's representation of femininity, her privileging of a white ideal of beauty, and her promotional approach to culture perpetuate inequality on an unprecedented scale. Simpson's thoughtful analysis exposes the complicity of a mass audience eager to celebrate Xuxa's deeply compromised representations of gender, race, and modernity.

Xuxa also explores the meaning behind the myth--Xuxa's long-term relationship with Brazil's soccer idol, PelÃ©, and the near-worship of her atypical blond, blue-eyed appearance by Brazil's population. As the author examines Xuxa's suggestive style juxtaposed with juvenile entertainment, and the phenomenon of Xuxa-look-alike teenaged paquitas, she unfold the symbolic territory of blond sex symbols worldwide.

"Simpson has brought the facts and persona of Xuxa together in this well-documented, well-written analysis of the Brazilian superstar. She touches bases on gender, race, and changing patterns in Brazil. Xuxa is rich with information, laced with insight about the methods, practices and abuses that abound with the marketing of a personality and its products, and the effect of TV on all who watch it, especially the children."