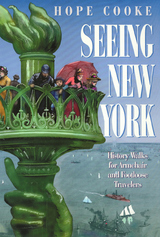 Since the 1700s, various ethnic and immigrant groups have been shifting and negotiating their place in New York City. Hope Cooke also struggled to find a "correlation of space" and "sense of belonging" when she returned to the city after spending her adult life living in a place in the Himalayas, the Queen of Sikkim (a tiny kingdom near Nepal). Abroad for so long, she returned with an urgent need to rediscover this city, to "find her way home."

It was not always a comfortable journey for Cooke: "On the days I felt secure, Manhattan's maelstrom was pure energy. On shaky days, the boundlessness made me yearn for limits, or, failing that, at least a vantage point." The book that has emerged is an entertaining and integrated account of New York City's social history, architecture, physical space, and culture. Starting with the American Indian settlements and the early days when the southern-most tip of Manhattan held little more than a bleak outpost of Dutch fur traders, Cooke tracks the economic development and journeys north, from the Village's beginnings as a refuge from dreaded summer fevers to the present day Dominican enclave of Washington Heights.

Written for armchair enthusiasts and walkabout adventurers, this book travels fourteen of the city's distinct and significant neighborhoods. Cooke's guide will make a historical sleuth out of local residents and tourists alike. Her off-the-beaten-path insights and witty observations help decode the urban landscape and reveal how social changes have reworked the city's terrain. Enhancing the narrative are 140 illustrations, including old engravings, maps, and current photographs.

In the series Critical Perspectives on the Past, edited by Susan Porter Benson, Stephen Brier, and Roy Rosenzweig.

Hope Cooke is a writer and urban historian. She has lectured widely on New York history, directed the walking tours program at the Museum of the City of New York, and written a weekly column for the New York Daily News. Her essays, short stories, and reviews have appeared in such popular periodicals as Redbook, Travel and Leisure, The New York Times, and The Chicago Sun Times. Among her previously published books is her acclaimed autobiography, Time Change.