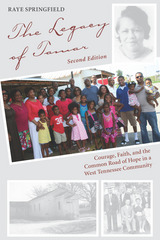 “The Legacy of Tamar centers on Brownsville, Haywood County, Tennessee, where Elbert Williams became the first NAACP official to be abducted and murdered my a white supremacist mob. This fascinating book is a good history of the people of Haywood County through a lens of five generations of an African American family. They endured one of those most oppressive white supremacist societies in the southern United States, but survived, advanced through higher education and training, and for generations achieved great things in their careers and lives despite the harmful effects of Jim Crow and continued racism in America.”
--Bobby L. Lovett, author of The Civil Rights Movement in Tennessee: A Narrative History

In this second edition, Raye Springfield brings the story of the Taylor-Springfield family and the community of Brownsville, Haywood County, Tennessee, into the twenty-first century. In 2015, as the fifteenth anniversary of The Legacy of Tamar approached, another important but relatively unknown event was also reaching its seventy-fifth anniversary: the June 1940 lynching of Elbert “Dick” Williams, the first known NAACP official killed during civil rights activities. Williams was a longtime Brownsville resident and secretary of the local NAACP chapter and was killed while organizing a voter registration drive for Haywood County’s black residents. In her preface to the second edition, Springfield recounts the services for Williams (services that were not allowed to be held in 1940), how times in Brownsville, and the nation, have changed, and yet how African Americans continue the fight for racial equality.

The Legacy of Tamar spans two world wars, the Great Depression, the civil rights era, and now the changing of the millennium. For the Taylor-Springfield family, ultimately, the dreams of prior generations were realized in the youth of the present day. More than just the story of one family in rural Tennessee, The Legacy of Tamar reflects historic nationwide struggles by African Americans and offers hope for new generations.
AUTHOR BIOGRAPHY
RAYE SPRINGFIELD lives in Nashville, where she has been an administrative law judge for fourteen years. She was previously an assistant general counsel for the Tennessee Board of Regents and assistant attorney general for the State of Tennessee.
TABLE OF CONTENTS