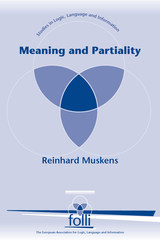 Muskens radically simplifies Montague Semantics and generalises the theory by basing it on a partial higher order logic resulting in a theory which combines important aspects of Montague Semantics and Situation Semantics. Richard Montague formulated the revolutionary insight that we can understand the concept of meaning in ordinary languages much in the same way as we understand the semantics of logical languages. Unfortunately, he formalised his idea in an unnecessarily complex way. The present work does away with unnecessary complexities, obtains a streamlined version of the theory, shows how partialising the theory automatically provides us with the most central concepts of Situation Semantics, and offers a simple logical treatment of propositional attitude verbs, perception verbs and proper names.
TABLE OF CONTENTS