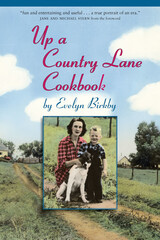 What can Evelyn Birkby possibly do to follow up the success of Neighboring on the Air: Cooking with the KMA Radio Homemakers? She can do what she has done in writing Up a Country Lane Cookbook. For forty-three years she has written a column entitled "Up a Country Lane" for the Shenandoah Evening Sentinel. Now she has chosen the best recipes from her column and interspersed them with a wealth of stories of rural life in the 1940s and 1950s, supplemented by a generous offering of vintage photographs. She has created a book that encompasses lost time.

With chapters on "The Garden," "Grocery Stores and Lockers," "Planting," and "Saturday Night in Town," to name a few, Up a Country Lane Cookbook recalls the noble simplicity of a life that has all but vanished. This is not to say that farm life in the forties and fifties was idyllic. As Birkby writes, "Underneath the pastoral exterior were threats of storms, droughts, ruined crops, low prices, sickness, and accidents."

Following the Second World War, many soldiers returned to mid-America and a life of farming. From her vantage point as a farm wife living in Mill Creek Valley in southwestern Iowa, Birkby observed the changes that accompanied improved roads, telephone service, and the easy availability of electricity. Her observations have been carefully recorded in her newspaper column, read by thousands of rural Iowans.

Up a Country Lane Cookbook is, then, much more than a cookbook. It is an evocation of a time in all its wonder and complexity which should be read by everyone from Evelyn Birkby's nearest neighbor in Mill Creek Valley to the city slicker seeking an education. Cook a meal of Plum-Glazed Baked Chicken, Elegant Peas, Creamed Cabbage, and Seven-Grain Bread, then finish it off with Frosted Ginger Creams with Fluffy Frosting. While the chicken is baking, read Evelyn's stories and think about the world the way it was.

Evelyn Birkby is a wife, mother, homemaker, newspaper columnist, author, and former radio personality. She is the author of several books, including Up a Country Lane Cookbook(Iowa).