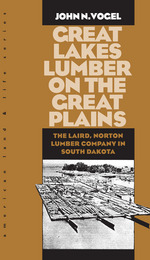 Focusing on the Plains territory of east central South Dakota as well as the Great Lakes lumber-producing region of Wisconsin's Chippewa Valley, John Vogel carefully and thoroughly examines the pattern and process by which lumber reached South Dakota. The Great Dakota Boom of 1878 to 1887 and the Laird, Norton Lumber Company of Winona, Minnesota, provide the basis for his engrossing book.

The westward expansion of the railroad and the continuing settlement of the Great Plains in the late nineteenth century allowed the lumber companies of Minnesota and Wisconsin to send their boards and beams and fenceposts and millwork to a market characterized by great demand and small supply. Laird, Norton followed settlers across southern Dakota as they arrived on the trains. The eastern portions of Dakota were settled first, and thus early lumberyards were found there; as settlement moved west, so did the lumberyards. Beyond its all-important function of distribution, the railroad forced Laird, Norton to alter the very structure of its operation. Experimenting with nearly complete vertical integration, the company pioneered organizational models that would serve significant purposes as frontier America—a republic of wood—solidified itself economically and culturally.

John Vogel, currently a visiting assistant professor at Marquette University, is now working on a comparative study on the cultural landscapes of the Sioux Indians and Euro-Americans on the Great Plains.