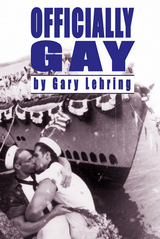 In 1993, simply the idea that lesbians and gays should be able to serve openly in the military created a firestorm of protest from right-wing groups and powerful social conservatives that threatened to derail the entire agenda of a newly elected President. Nine short years later, in the wake of September 11, 2001, the Pentagon's suspension of discharge of gay and lesbians went largely overlooked and unremarked by political pundits, news organizations, military experts, religious leaders and gay activists. How can this collective cultural silence be explained? Officially Gay follows the military's century-long attempt to identify and exclude gays and lesbians. It traces how the military historically constructed definitions of homosexual identity relying upon religious, medical, and psychological discourses that defined homosexuals as evil, degenerate, and unstable, making their risk to national security obvious, and mandating their exclusion from the Armed Services. Officially Gay argues that this process made possible greater regulation and scrutiny of gays and lesbians both in and out of the military while simultaneously helping to create a gay and lesbian political movement and helped shape the direction that movement would take.
AUTHOR BIOGRAPHY
Gary L. Lehring is Associate Professor of Government at Smith College.
TABLE OF CONTENTS