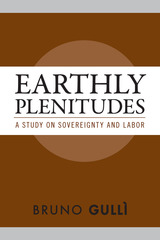 A fierce critique of productivity and sovereignty in the world of labor and everyday life, Bruno Gullì’s Earthly Plenitudes asks, can labor exist without sovereignty and without capitalism? He introduces the concept of dignity of individuation to prompt a rethinking of categories of political ontology. Dignity of individuation stresses the notion that the dignity of each and any individual being lies in its being individuated as such; dignity is the irreducible and most essential character of any being. Singularity is a more universal quality.

Gullì first reviews approaches to sovereignty by philosophers as varied as Gottfried Leibniz and Georges Bataille, and then looks at concrete examples where the alliance of sovereignty and capital cracks under the potency of living labor. He examines contingent academic labor as an example of the super-exploitation of labor, which has become a global phenomenon, and as such, a clear threat to the sovereign logic of capital. Gullì also looks at disability to assert that a new measure of humanity can only be found outside the schemes of sovereignty, productivity, efficiency, and independence, through care and caring for others, in solidarity and interdependence.
AUTHOR BIOGRAPHY
Bruno Gullì teaches philosophy at Long Island University, Brooklyn Campus, and at Kingsborough Community College. He is the author of Labor of Fire: The Ontology of Labor between Economy and Culture (Temple).
REVIEWS

“Gullì is arguing for bold and radical theses which illuminate developments in the contemporary world, go beyond existing literature in the field in a dramatic way (by critiquing the very idea of sovereignty) and draw out the political implications of so-called postmodern theory. In my opinion, this is a seminal work.”—Anatole Anton, San Francisco State University

PART I: Critique of Sovereignty
1. Singularity or the Dignity of Individuation
2. Exception and Critique
3. Bataille’s Special Use of the Concept of Sovereignty