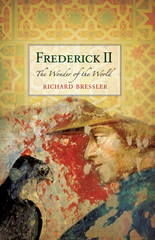 A Medieval King Who Embraced the Arts and Sciences
One of the most remarkable personalities of the Middle Ages, Frederick II of Hohenstaufen was born in 1194. His parents—the reigning Holy Roman Emperor and the heiress to the Kingdom of Sicily—belonged to two of the leading ruling families in medieval Europe. The lands controlled by these two families extended from southern Denmark to Sicily, from modern Belgium to Bohemia. Frederick II eventually ruled the joint kingdom, and the story of how he gained and maintained this status is the primary thread running through his life. As a child in Sicily, Frederick was a ward of Pope Innocent III. When he came of age, he sought to be crowned Holy Roman Emperor but only succeeded in 1220 after many years of negotiations with the Vatican, which was reluctant to give up or share power. Resenting the influence and pressure from the papacy, Frederick became its leading opponent. As a result, the new pope, Gregory IX, condemned Frederick as the Antichrist. However, Frederick believed he was a sincere Christian, and led the Sixth Crusade to the Holy Land while under excommunication.
As a ruler, Frederick was unusually modern in his sensibilities. Sicily was a cultural melting pot in the thirteenth century and Frederick ended up speaking several languages. He protected Jews and Muslims in his realms and prosecuted Christian heretics throughout his thirty-year reign. Frederick was married three times, and had four legitimate and eleven illegitimate children. He was a polymath with interests ranging from sculpture, architecture, and poetry to mathematics and science in many forms, earning him admiration from his contemporaries who called him Stupor mundi, “Wonder of the World.” His lifelong interest in hunting with birds of prey led to the writing of the classic work De Arte Venandi cum Avibus (The Art of Falconry), which is still in print. Based on the latest scholarship and written for the general reader, Frederick II: The Wonder of the World by Richard Bressler provides the complete story of this complex and fascinating man.
REVIEWS
“While many historians continue to abandon the field of popular history, focusing instead on the scholarly monograph, journal article, and textbook, it is to be hoped that the void is filled by books of a quality equal to this one.”—The Medieval Review