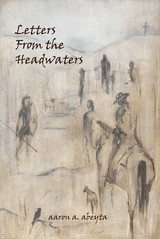 Through epistolary essays and poems, American Book Award- and Colorado Book Award-winning author and poet Aaron A. Abeyta captures the soul of the cultural and geographical crossroads of the driest quadrant in the nation, the Colorado headwaters, source to all the rivers in the southwestern and mid-western United States. Originating from and expanding on the themes of twenty-five years of “Headwaters” conferences at Western State Colorado University, these essays and poems embrace the region’s past while also exploring the struggles of a present that seeks a sustainable future for the borderlands that define the very cross-cultural essence of the American experience.

Aaron A. Abeyta is a Colorado native and professor of English at Adams State College. For his previous collection,Colcha, Abeyta received an American Book Award and the Colorado Book Award. Abeyta is also the recipient of a Colorado Council on the Arts fellowship for poetry. He lives in Southern Colorado where he can remain close to his family and culture, both of which greatly influence his work.