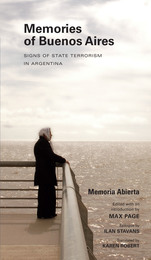 In the 1970s, Argentina was the leader in the "Dirty War," a violent campaign by authoritarian South American regimes to repress left-wing groups and any others who were deemed subversive. Over the course of a decade, Argentina's military rulers tortured and murdered upwards of 30,000 citizens. Even today, after thirty years of democratic rule, the horror of that time continues to roil Argentine society.

Argentina has also been in the vanguard in determining how to preserve sites of torture, how to remember the "disappeared," and how to reflect on the causes of the Dirty War. Across the capital city of Buenos Aires are hundreds of grassroots memorials to the victims, documenting the scope of the state's reign of terror. Although many books have been written about this era in Argentina's history, the original Spanish-language edition of Memories of Buenos Aires was the first to identify and interpret all of these sites. It was published by the human rights organization Memoria Abierta, which used interviews with survivors to help unearth that painful history.

This translation brings this important work to an English-speaking audience, offering a comprehensive guidebook to clandestine sites of horror as well as innovative sites of memory. The book divides the 48 districts of the city into 9 sectors, and then proceeds neighborhood-by-neighborhood to offer descriptions of 202 known "sites of state terrorism" and 38 additional places where people were illegally detained, tortured, and killed by the government.

Memoria Abierta was founded in the year 2000. Its goal is to foster social memory to enrich Argentina's political culture, contributing to the construction of identity and the consolidation of democratic values and practices. Memoria Abierta collects, preserves, classifies, and disseminates the archival heritage of Argentina's human rights organizations as well as personal and institutional archives connected to the history of state terrorism. It produces evidence about the country's social and political life in the 1960s and 1970s and works on issues of territorial and spatial memory relating to the years of political violence in Argentina.

Motivated by a deep commitment to the transmission of memory and to the public dissemination of its archival materials, Memoria Abierta develops educational tools, produces print and audiovisual resources, and organizes public exhibits that represent the past and make connections to issues and events in the present. In its work Memoria Abierta collaborates with civil society groups and the state to create and strengthen spaces for debate and reflection. It participates in the International Coalition of Sites of Conscience along with other regional and global organizations that work to prevent all forms of authoritarianism.

Max Page is professor of architecture and history at the University of Massachusetts Amherst.