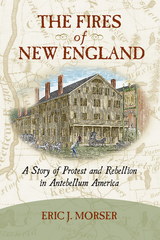 In the winter of 1834, twenty men convened in Keene, New Hampshire, and published a fiery address condemning their state's legal system as an abomination that threatened the legacy of the American Revolution. They attacked New Hampshire's constitution as an archaic document that undermined democracy and created a system of conniving attorneys and judges. They argued that the time was right for their neighbors to rise up and return the Granite State to the glorious pathway blazed by the nation's founders.

Few people embraced the manifesto and its radical message. Nonetheless, as Eric J. Morser illustrates in this eloquently written and deeply researched book, the address matters because it reveals how commercial, cultural, political, and social changes were remaking the lives of the men who drafted and shared it in the 1830s. Using an imaginative range of sources, Morser artfully reconstructs their moving personal tales and locates them in a grander historical context. By doing so, he demonstrates that even seemingly small stories from antebellum America can help us understand the rich complexities of the era.
AUTHOR BIOGRAPHY
Eric J. Morser is associate professor of history at Skidmore College and author of Hinterland Dreams: The Political Economy of a Midwestern City.
REVIEWS
-- John Resch, author of Suffering Soldiers: Revolutionary War Veterans, Moral Sentiment, and Political Culture in the Early Republic
-- Aaron Sachs, author of Arcadian America: The Death and Life of an Environmental Tradition