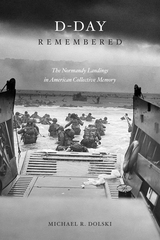 D-Day, the Allied invasion of northwestern France in June 1944, has remained in the forefront of American memories of the Second World War to this day. Depictions in books, news stories, documentaries, museums, monuments, memorial celebrations, speeches, games, and Hollywood spectaculars have overwhelmingly romanticized the assault as an event in which citizen-soldiers—the everyday heroes of democracy—engaged evil foes in a decisive clash fought for liberty, national redemption, and world salvation.

In D-Day Remembered, Michael R. Dolski explores the evolution of American D-Day tales over the course of the past seven decades. He shows the ways in which that particular episode came to overshadow so many others in portraying the twentieth century’s most devastating cataclysm as “the Good War.” With depth and insight, he analyzes how depictions in various media, such as the popular histories of Stephen Ambrose and films like The Longest Day and Saving Private Ryan, have time and again reaffirmed cherished American notions of democracy, fair play, moral order, and the militant, yet non-militaristic, use of power for divinely sanctioned purposes. Only during the Vietnam era, when Americans had to confront an especially stark challenge to their pietistic sense of nationhood, did memories of D-Day momentarily fade. They soon reemerged, however, as the country sought to move beyond the lamentable conflict in Southeast Asia.

Even as portrayals of D-Day have gone from sanitized early versions to more realistic acknowledgments of tactical mistakes and the horrific costs of the battle, the overarching story continues to be, for many, a powerful reminder of moral rectitude, military skill, and world mission. While the time to historicize this morality tale more fully and honestly has long since come, Dolski observes, the lingering positive connotations of D-Day indicate that the story is not yet finished.

MICHAEL R. DOLSKI is a historian with the Defense POW/MIA Accounting Agency and lives in northern Virginia. He is the coeditor, with Sam Edwards and John Buckley, of D-Day in History and Memory.

REVIEWS
"Focusing on the ways in which Americans have remembered D-Day, Michael R. Dolski’s engrossing book analyzes how constructions of the past both shape and are continually
reshaped by the present. His sensitive and subtle examination challenges readers to think more deeply and less simplistically about the cultural functions of war remembrance.”
—Emily S. Rosenberg, author of A Date Which Will Live: Pearl Harbor in American Memory
— -

"This is an important book that deals with our perceptions of D-Day and how those perceptions have changed over the past seventy years. It rests on a solid research foundation, is well written, and tells a significant story that captures our persisting interest in the war.”
—Allan M. Winkler, Distinguished Professor of History, Miami University
— -