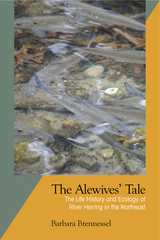 While on vacation in 1980, biologist Barbara Brennessel and her family came across an amazing sight: hundreds of small silver fish migrating from the Atlantic Ocean, across a channel connecting two ponds in the town of Wellfleet on Cape Cod. She later learned that these tiny river herring were important for the ecology and economy of the region and that volunteers were counting fewer and fewer fish migrating each year.

The Alewives' Tale describes the plight of alewives and blueback herring, two fish species that have similar life histories and are difficult to distinguish by sight. Collectively referred to as river herring, they have been economically important since colonial times as food, fertilizer, and bait. In recent years they have attracted much attention from environmentalists, especially as attempts are being made, on and beyond Cape Cod, to restore the rivers, streams, ponds, lakes, and estuaries that are crucial for their reproduction and survival.

Brennessel provides an overview of the biology of the fish—from fertilized eggs to large schools of adults that migrate in the Atlantic Ocean—while describing the habitats at different stages of their life history. She explores the causes of the dramatic decline of river herring since the mid-twentieth century and the various efforts to restore these iconic fish to the historic populations that treated many onlookers to spectacular inland migrations each spring.
AUTHOR BIOGRAPHY
Barbara Brennessel is professor emerita of biology at Wheaton College. She is author of Diamonds in the Marsh: The Natural History of the Diamondback Terrapin and Good Tidings: The History and Ecology of Shellfish Farming in the Northeast.